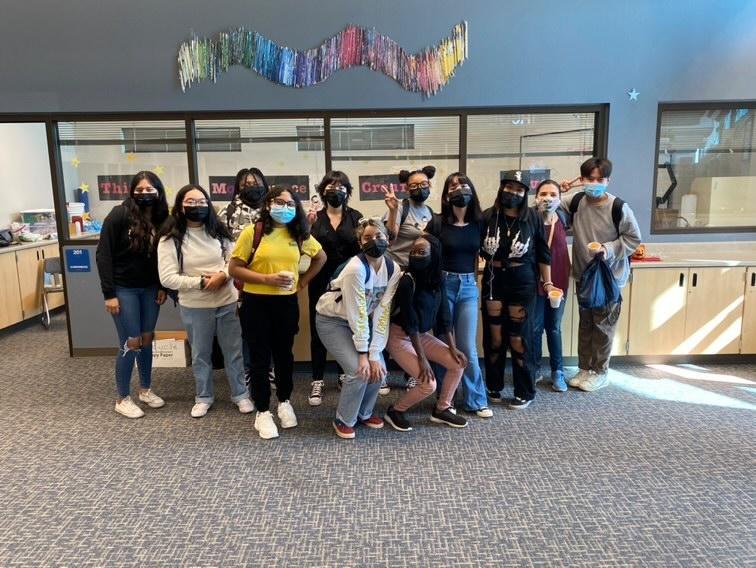 The Empowerment Club is so ready to dominate this school year! It officially started during the end of the 2018-2019 school year when sponsors Stephanie Ehrick, librarian, and Christina Frazen, history teacher, decided that they were ready to create the amazing club! Their main goal was to create a safe space for all of the girls on campus where everyone feels loved and respected, not judged at all.

Ehrick, said that she and Frazen started the club two years ago because ¨we both have always been passionate about women’s issues. We really liked the idea of having a support system for our girls because we remember how awful it was to be a teen sometimes, especially a teenage girl.¨ She said that the main goal of Empowerment Club is to stop girls being mean to other girls. She hopes ¨they started to support people and wish them good things instead of trying to tear them down.¨ Another goal that Ehrick shared is to  ¨bond  and be strong as a club.¨ Like schools all over the world, IHS deals with girl versus girl issues regularly. The club hope to solve some these problems  by bringing the girls together.

Margot Reyna, President of Empowerment, joined Empowerment during the 2019-2020 school year when she was a sophomore. She said, ¨I heard of empowerment club when I was a freshman, but I was too scared and intimidated to join. Because of that,  I want to make empowerment club somewhere where everyone feels safe, included, and confident of themselves.¨  Once Reyna ventured out of her shell and was fully emerged in the greatness of Empowerment, she was ready to run for president. She was elected earlier in the school year. She said, ¨I ran for president because I believed that the empowerment club needed someone that is truly passionate about women’s issues.¨

Breanna Romano, club treasurer, has been a part of Empowerment Club since the end of her freshman year. Earlier this year, she was elected club treasurer. So far, the club has impacted her personally because of its strong community. She said, ¨When I come to meetings, I know I can talk about serious stuff with the other people in the club or even just have some fun eating donuts and just enjoying each others company.¨

Romano also said that during the 2018-2019 school year, Empowerment Club did a dating violence campaign that  provided information and support to the whole school. For this year, she explained that she wants the club to be looked at positively by the rest of the school. She said, ¨I want to keep using the origin of the club which is women empowerment, women strength and femininity to help build up the community within the school and around us.¨

Now that president, vice president and treasurer have been elected, the club is ready to begin preparing and planning for all the things to do this school year. Reyna said, ¨Some activities I want to do with the club are having a donation day where students donate their old  clothing to homeless women or women shelters. Also, I would like for Empowerment Club to plant flowers around the school.¨

During the 2019-2020 school year, the club did bonding activities such as yoga, dance workshops, watched Hidden Figures together, and had special speakers such as a female police officer come in to talk to the club. This year, they still have to officially decide what the club will do throughout the school year, but so far Ehrick said, ” I would like to do some type of big service campaign similar to the dating violence campaign that we did. But I want our club to decide what it is, and I want our girls to figure out what´s the need and how can we do something positive for the school. I would love to host a book talk with anybody that wants to show up that talks about issues and things that affect women.¨

Empowerment Club meets every Wednesday morning at 8:15 a.m. in the Media Center, and invites all!